1. A neologism coined for the celebration of the 30-year anniversary of the first glass kitchen, to investigate the events that prefigured and lead to the introduction of the use of glass in the kitchen industry and that established the current conditions that allow glass to be the primary material employed to design and construct Valcucine’s masterpieces.

2. The Fuorisalone 2017 event in the luxurious Valcucine boutique in Brera, Milan, presents a retrospective of glass, portraying Valcucine’s pioneering spirit and eco-sustainable vision, always ahead of the times and anticipating the ways kitchens were changing, causing a modification of the paradigm throughout the sector, both from a stylistic and from a constructive viewpoint, and introducing the “glass is more” principle.

WE ARE WAITING FOR YOU

The designer’s pioneering spirit, paired with his ancestral bent for research into materials, generated the idea of using a material that had not yet been explored in the kitchen: glass.

In 1987 Gabriele Centazzo designed Artematica in Vitrum, the first kitchen made entirely of glass, following his imagination and satisfying an intimate need that lead to the creation of a 100% recyclable kitchen.

The apparent contrast between the lightness of glass and its load-bearing capacity, capable of supporting the monolithic presence of a 200 kg rock, achieved never-before-seen performances and unexpected functions. By reaching beyond the stereotypes of the tried and tested appications of glass it has been possible to rediscover its resistance and its ability to become “dematerialised”.

Discover the 30 years of Valcucine glass 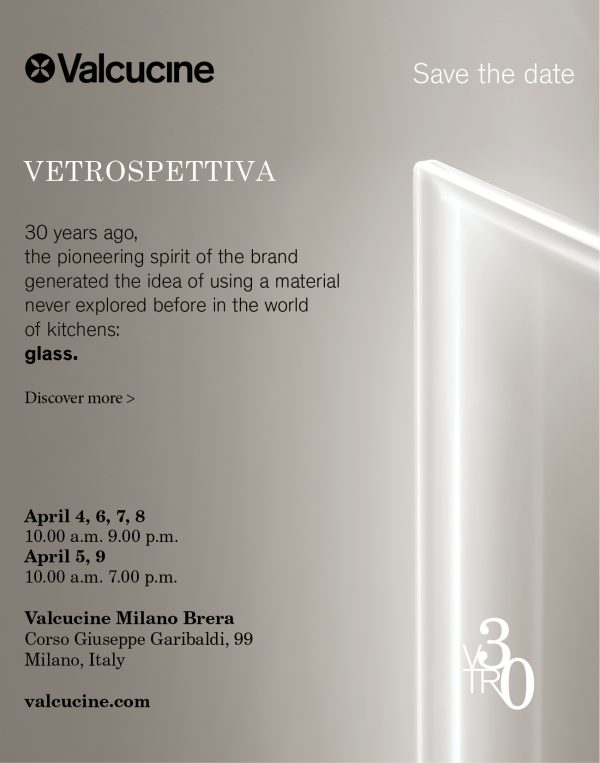